Ligustrum ovalifolium trough hedging or Green privet hedging has traditionally been seen in more urban settings.  It is an easy to grow and reliable hedge that with regular trimming will give you an excellent screening hedge for many years to come.

Green Privet (Ligustrum ovalifolium) trough hedging is sometimes seen as the traditional British garden hedge, being one of the most commonly grown hedges and shrubs.  Commonly called the oval leaved privet due to its oval leaves, this semi evergreen hedge makes a stunning boundary or dividing hedge

Green Privet (Ligustrum ovalifolium hedge) trough hedging is suitable for growing in a wide range of soil conditions and locations.  It will also tolerate shade and will grow underneath a tree canopy in and amongst the tree roots where it would be very difficult to get anything else to grow.  But this situation will impact on the speed of growth as well as the density of the foliage.  Being a semi-evergreen hedge, the amount of leaf retained over the winter is dependent on a variety of things and where the soils are poor or waterlogged, or it is exposed to strong winds and the more northerly areas of Britain it will loose a lot of its leaf during the winter months.  However, come the spring it will burst back in to leaf and be as dense a hedge as it was before.

It is recommended that Green Privet (Ligustrum ovalifolium hedge) trough hedging is trimmed 3 times a year and also trimmed with a slight taper, so the top is narrower than the base to give the best and density finish to the hedge.  Trimming with a taper will make it that leaves are retained all the way down to the ground.  If left untrimmed it will produce a white flower with quite a strange perfume which is followed by clusters of small black berries, however regular trimming will remove these with no detriment to the plant. 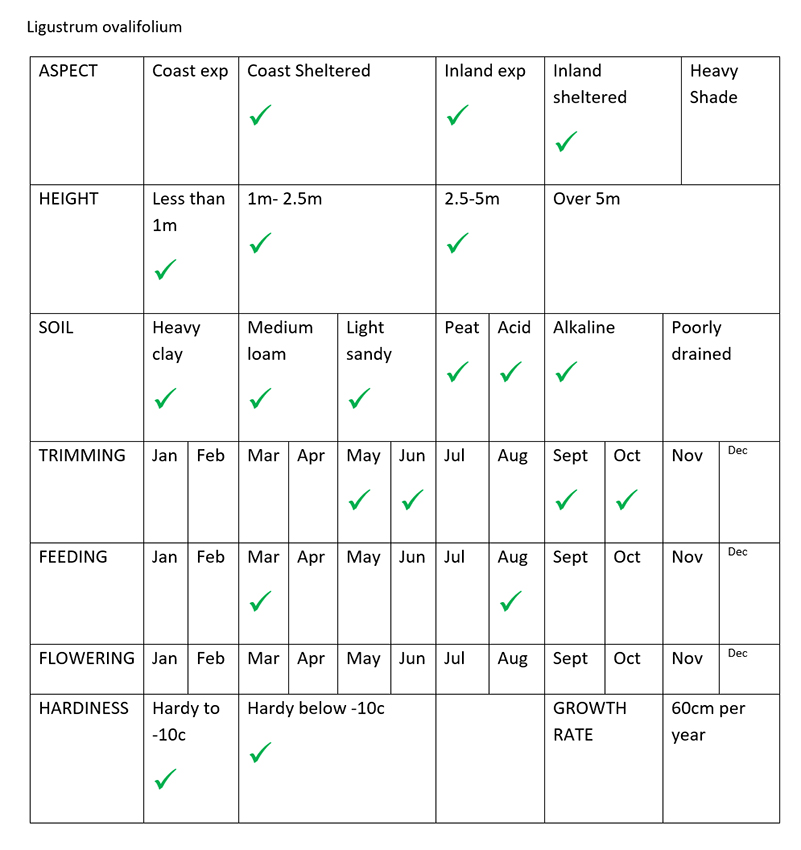