Hornbeam or Carpinus betulus is a British native plant that can be kept trimmed to make a lovely hedge.  It is not fussy about soil types and will grow anywhere.  It will hold a few grey brown leaves over the winter months giving some extra protection but really shines in the spring with its vibrant pale green new leaves.

Hornbeam (Carpinus betulus) is a sturdy deciduous hedge which has green leaves that look similar to those of Green Beech (Fagus sylvatica) but are a bit more serrated on the edge and a matt green. Like the Beech it also keeps a proportion of the old leaves on its branches through the winter and into the spring giving a better screening effect.  Although the amount of leaf that is retained is dependent on the location that the plant is in and how exposed to the wind it is, as well as the age of the plant (the older and denser the foliage the more of the leaves will be retained).  The leaves turn a lovely yellow in the Autumn before fading to a grey brown. Hornbeam (Carpinus betulus hedge) is tolerant of a wide range of soil types and growing conditions making them a true general-purpose hedge that reliably performs year after year.   Being a British native the Hornbeam (Carpinus betulus) will make a great wildlife hedge, offering both shelter and food, it is also a good privacy hedge and a good sound proofing hedge.  It once made up the Native forests of the south east and east of England and was coppiced for fire wood. With regular trimming Hornbeam (Carpinus betulus hedge) trims up to a very clean finish which will give a formal look to a garden if wanted, but will also act as a great back drop to any flowering plants that may be in front of it.  Because it is so versatile it is planted by a lot of nurseries  for shelter across there sites. The Royal Horticultural Society gave Hornbeam an Award of Garden Merit in 1984. 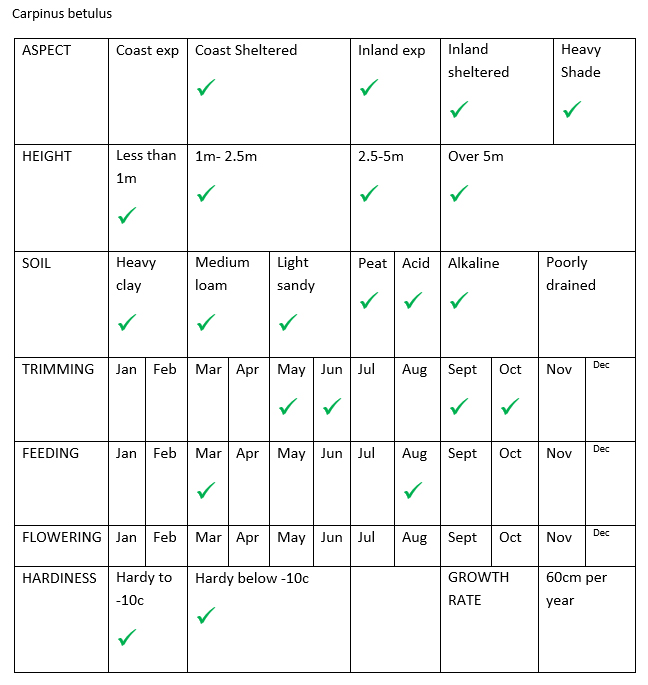